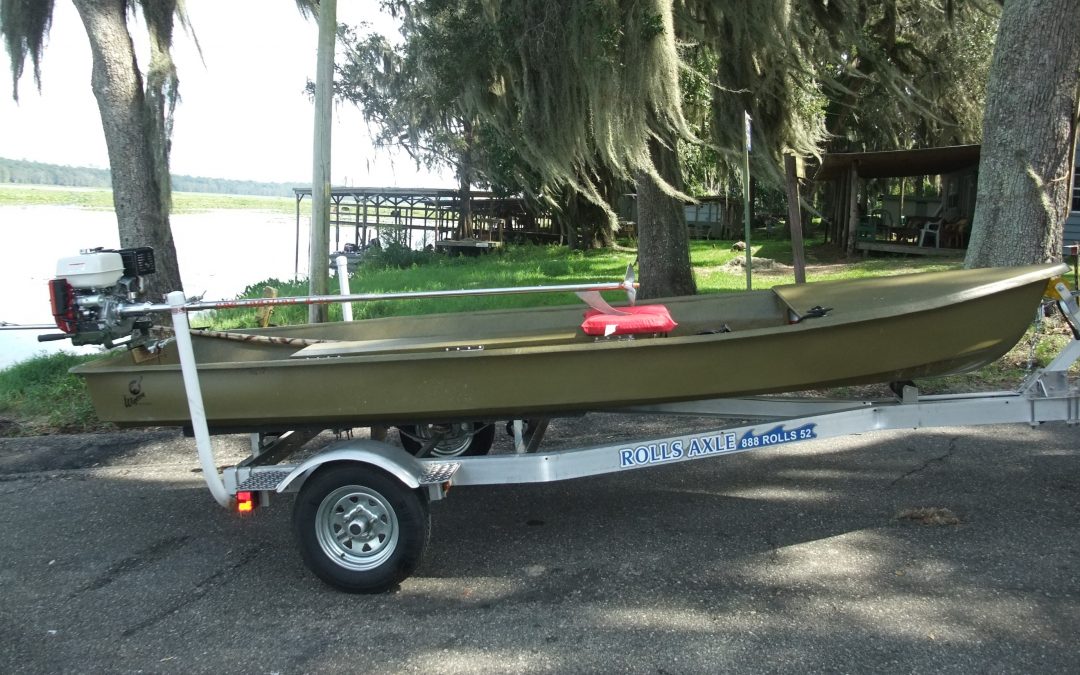 In the past twenty-five years, I’ve seen a lot of boat builders and boats come and go, and during that time there have been very few hull designs that have impressed me.  But the first time I ever laid eyes on the Wigeon duck boat I knew it was something special.  After tracking down the builder, Cody Reese of Deaddux, LLC, I finally understood why.

About twenty minutes east of Tallahassee, FL, we turned off the blacktop onto a little two rut road.  The trail meandered down through primeval hammocks of massive live oaks draped in Spanish moss, and then up through scented pine forest, and finally opened onto a picturesque clearing, overlooking a southern farmhouse.  Up the hill from the house was a simple barn where Cody Reese has been plying his trade for the past 20 years.  Cody builds custom duck boats, by hand, one at a time.

When you first meet Cody, you know you’re definitely in the deep South, and you can tell by his firm handshake and honest gaze, that you’ve just met yourself a sho-nuff real Florida Cracker.  You know …the kind of fellow who says what he means, and does what he says.  Cody’s farm lies on the western shores of Lake Miccosukee, one of the finest duck hunting lakes in the South.  Amazingly, Cody’s family has been on this same land for almost 200 years, spanning 5 generations!  His fourth great grandfather, Miles Blake, came to Florida with Andrew Jackson in the early 1800’s and founded Blakely Plantation.  With its stately avenue of oaks, the Blakely plantation home is still there, and so are Blake’s descendants, and they are still duck hunting on the same lake that their forefathers hunted. 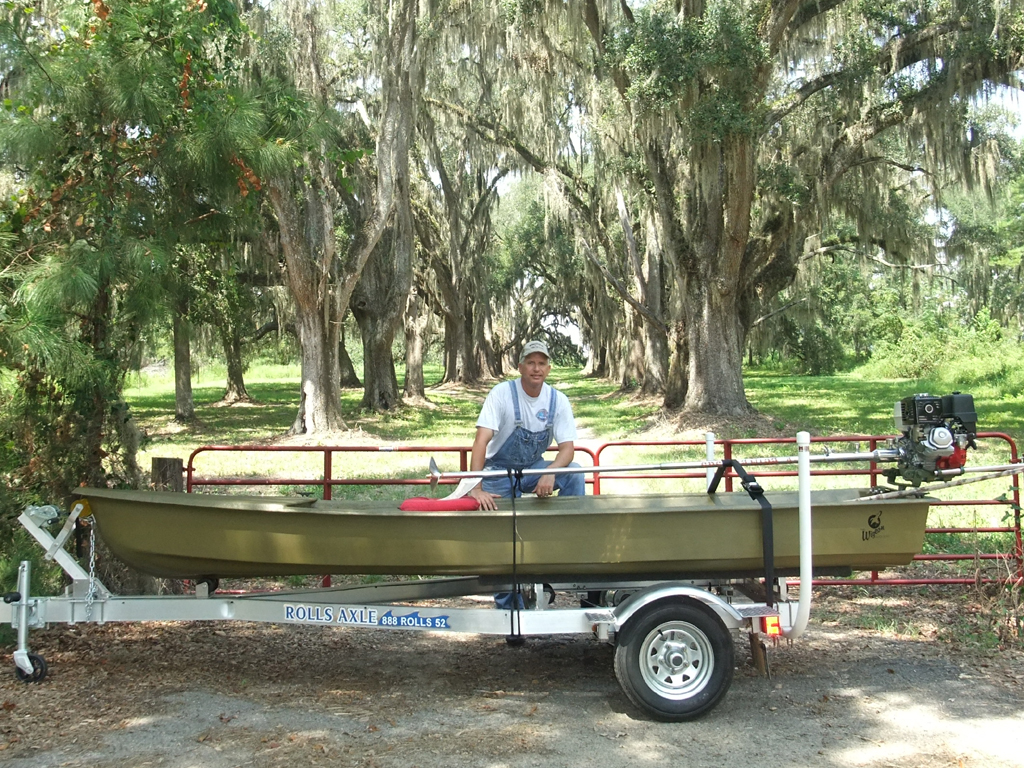 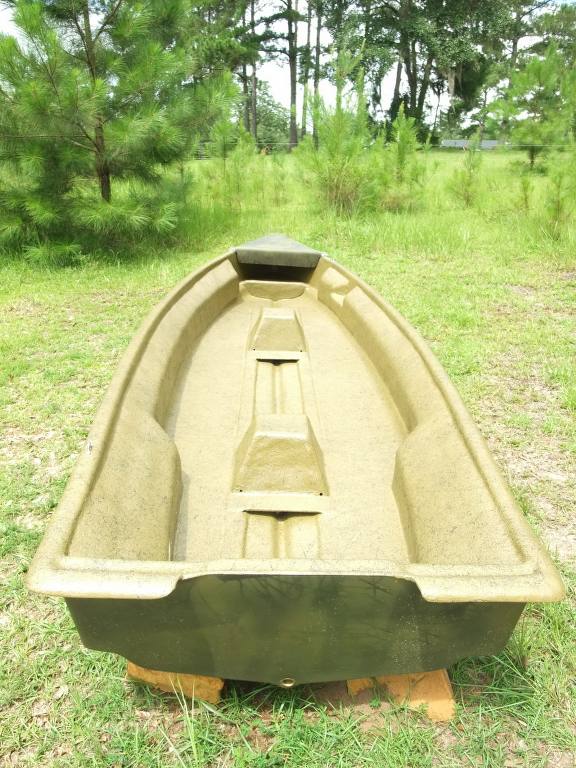 The lineage of the Wigeon duck boat is also interesting.  It was designed by a professor at Florida State University using a lofting method not typically used in the boat building industry.  The professor used modeling clay, just like they use in the design of aircraft and automobiles.  Modeling clay allows for very precise measurements.  The clay model was used as the plug to build the fiberglass mold Cody uses today.

Cody and his father inherited one of the Wigeon Duck Boat hulls from underneath an old farmhouse back in 1989 and began duck hunting out of it.  Descending from generations of wooden duck boat builders, both men liked the little swamp skiff so much, they decided to make the change from wood construction, and start building with fiberglass.  The Reese’s acquired all the molds and copyrights for the Wigeon, and began producing their custom duck boats, one at a time.  Over the past 20 years, Cody has provided quality duck boats to numerous happy customers, and his business has prospered solely by word of mouth.

A closer look at Cody’s boat reveals why hunters recommend the Wigeon to their buddies.  The long slender hull is 14’5” long and 46” at its widest point, making it ideal for hunting flooded timber or swamps with heavy vegetation.  The 16” transom will accommodate a longtail motor, surface drive motor, or traditional outboard.  The base model is an open hull, which can be customized with seating and storage to fit the varying needs of sportsmen.  Cody offers custom pedestal seating that can be set up for operating a longtail or a regular outboard.  Constructed with hand-laid roving and polyester resin, the average hull weighs only 185 pounds.

After we finished looking the hull over, Cody took us down to the lake for a ride in his personal Wigeon.  I was impressed with the hull’s performance.  When I stepped into the boat at the landing, I immediately noticed it was stable, and not at all tippy.  I took a seat in the bow, and while underway, I never got wet from bow spray.  The raised bow and rolled gunwale edge contribute to the surprisingly dry ride of the narrow hull.

Cody was running a 10hp Copperhead surface drive that pushed the little boat across the mud and water lilies at speeds up to 22 mph.  The hull contained no false bottom, so I kept a close eye on the floor and saw no flexing or buckling of the hull bottom while underway.

One of the key features contributing to the vessels lateral stability is the hull’s soft chines that translate into plenty of buoyancy for two well-fed country boys weighing well over two-hundred pounds each.

It wasn’t a hard decision at all to make…I really liked the Wigeon, and wanted Cody to build me one.  Once we were back at the barn, I asked Cody if he could build a casting platform in the bow because I like to cast net mullet, and I wanted additional dry storage in the bow.  Cody said, “That’s easy.”  I asked if he could build me a long fiberglass coffin seat down the middle of the boat, divided into a forward battery compartment and rear gun box.  Again, Cody said that would also be very simple.  Cody graciously accommodated my every request.   We sealed the deal with a handshake, and Cody said he would call me when the boat was ready.

Three weeks later the phone rang.  It was Cody, “Jon, your boats finished.  You can pick it up any time you’re ready.”  We loaded a Swamp Runner longtail into the back of the truck, and made the 300 mile trip to Lake Miccosukee to run the Wigeon with our longtail system for the first time.

Upon arrival, I was pleasantly surprised to find that Cody had built the boat exactly how I wanted it.  The custom gun box and casting platform added some additional weight to the hull, bringing it up to about 220 pounds.  We loaded the hull onto my trailer and within a few minutes, had our longtail installed.  Then we headed down to the landing for a test drive……. 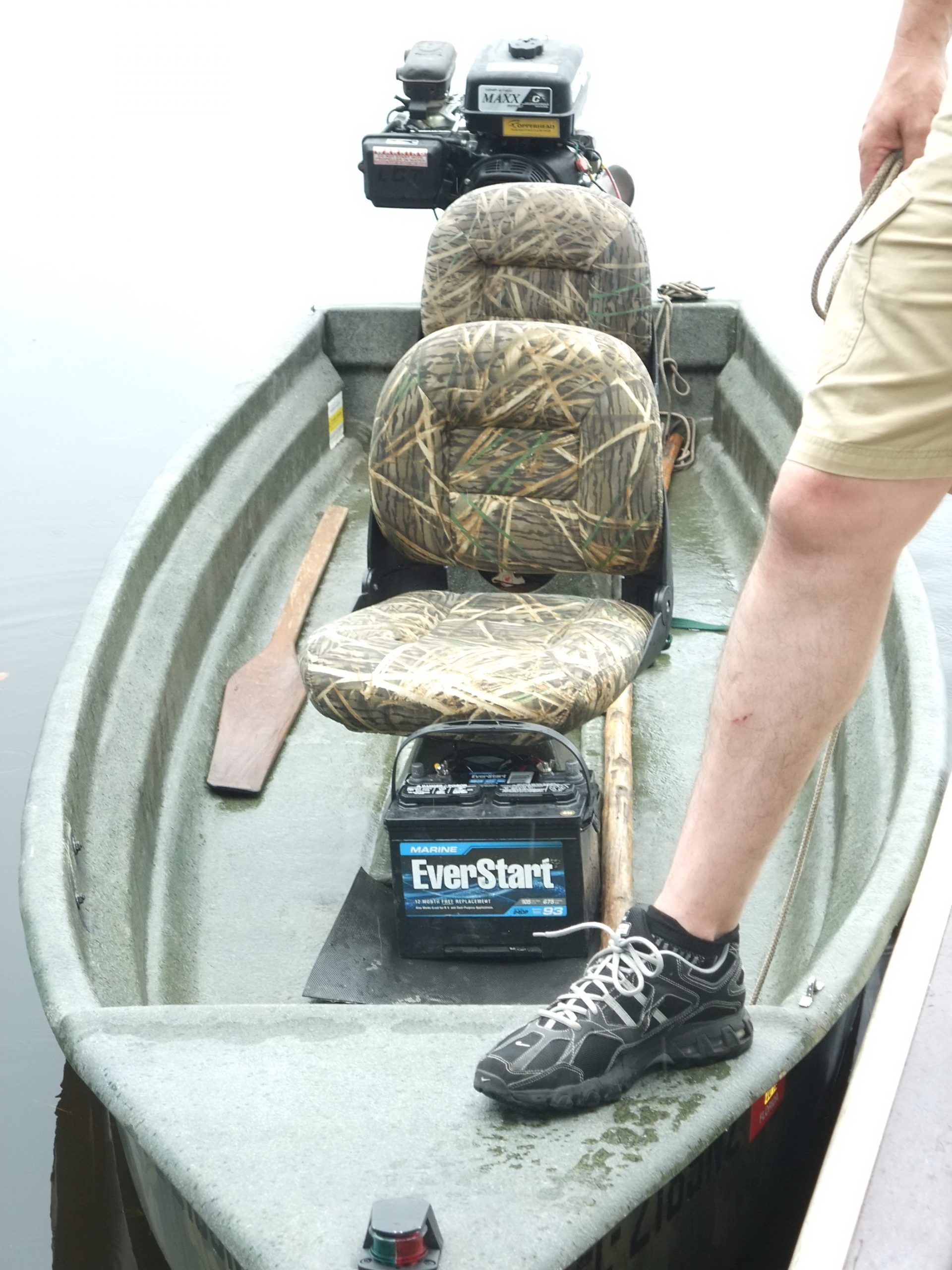 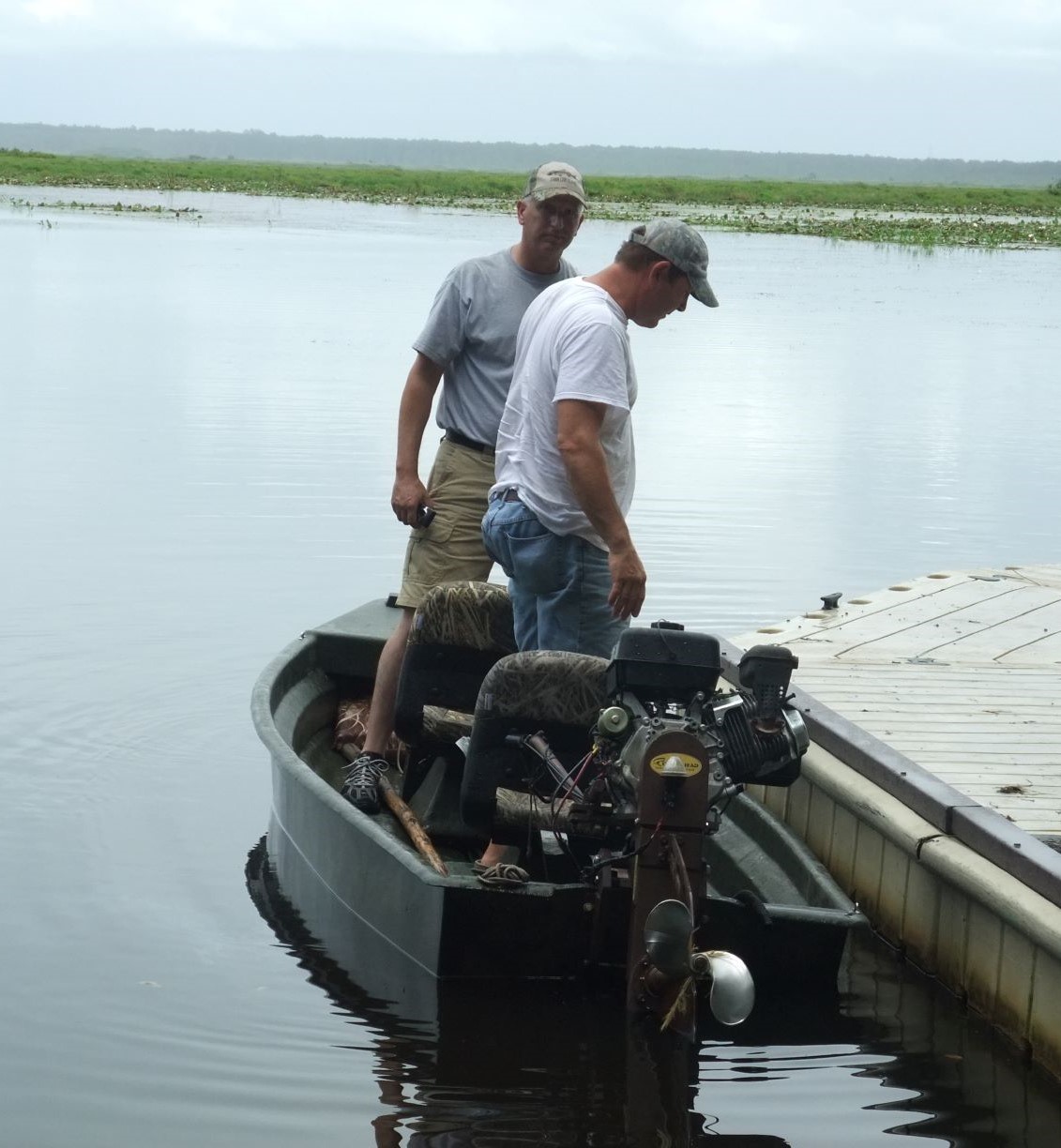 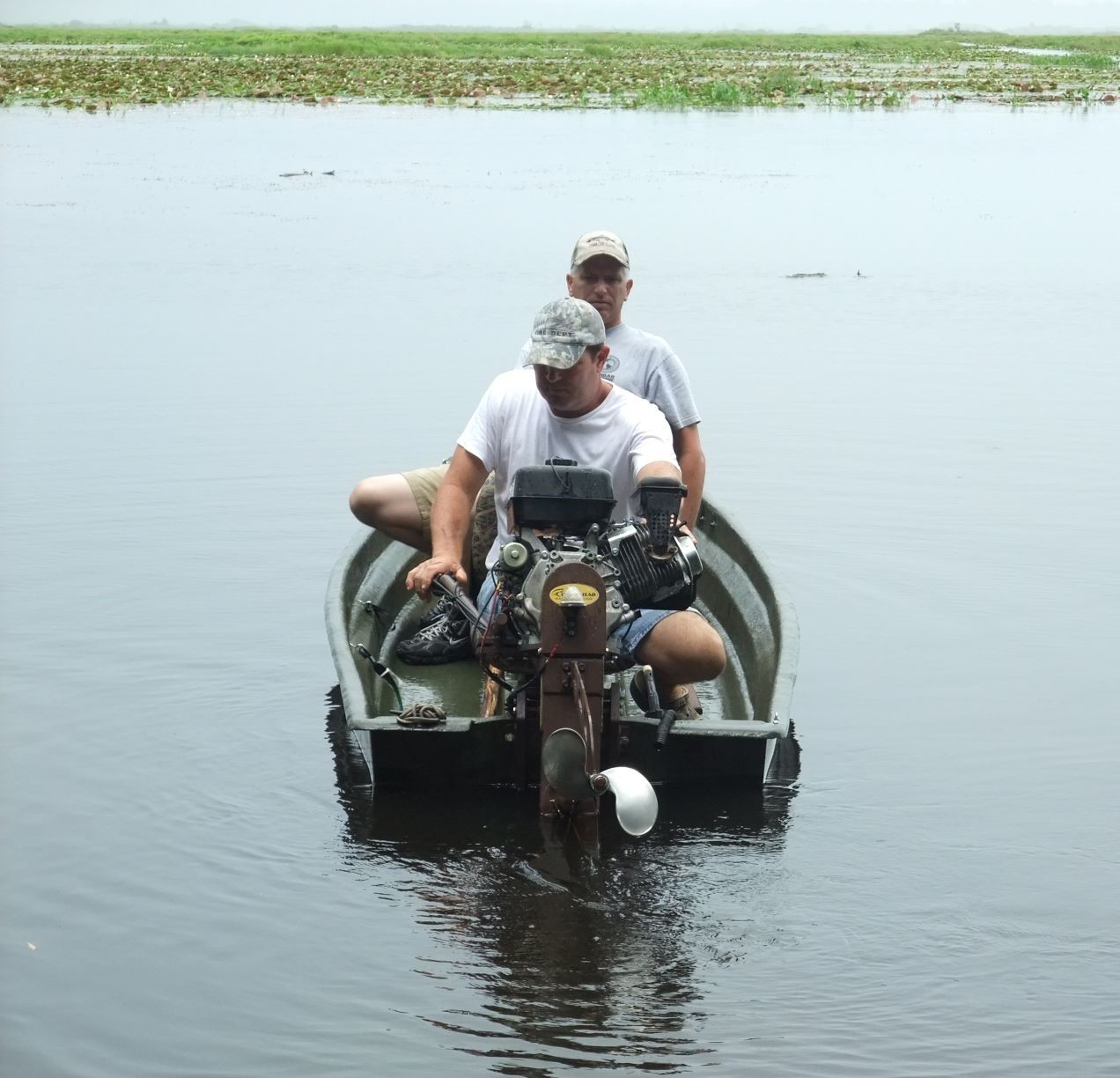 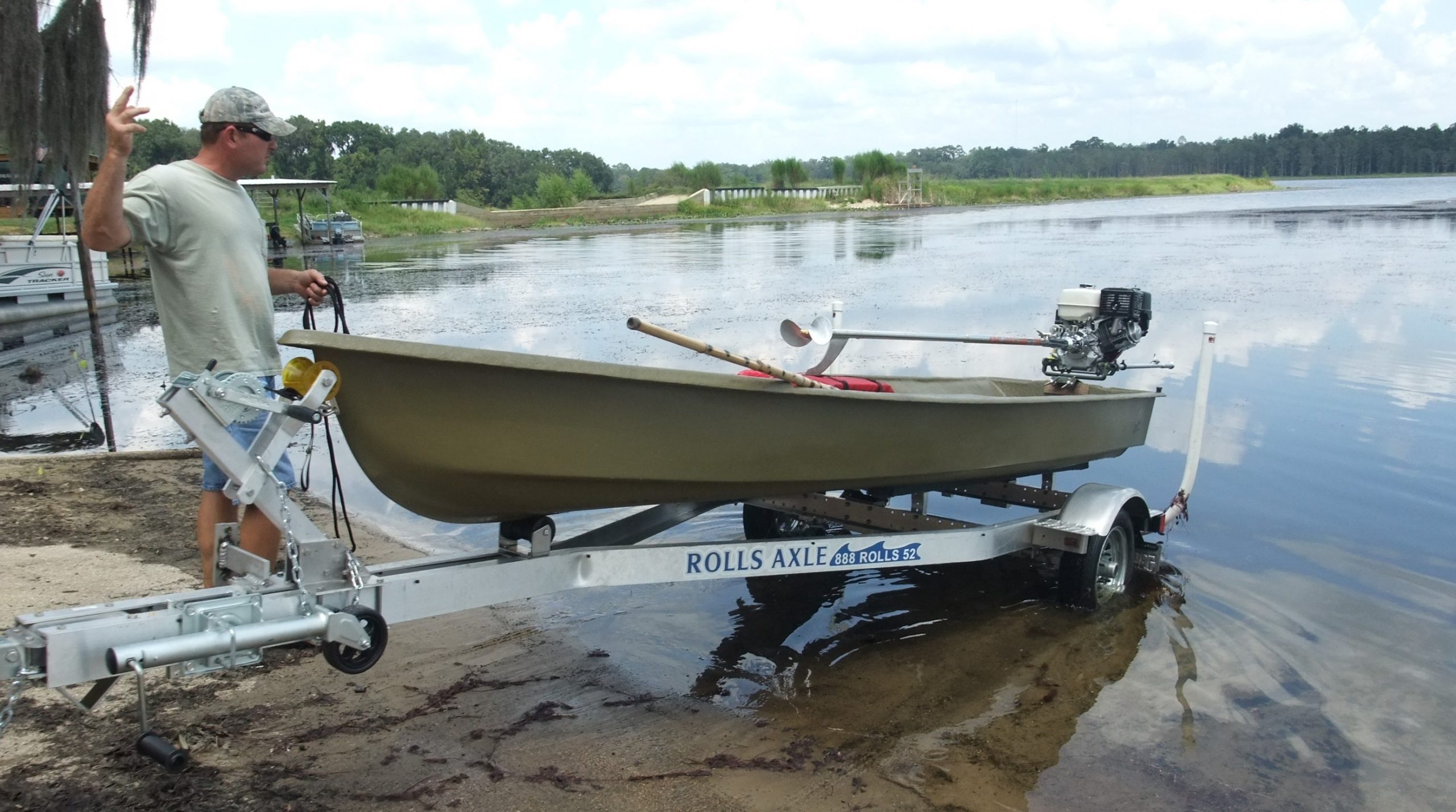 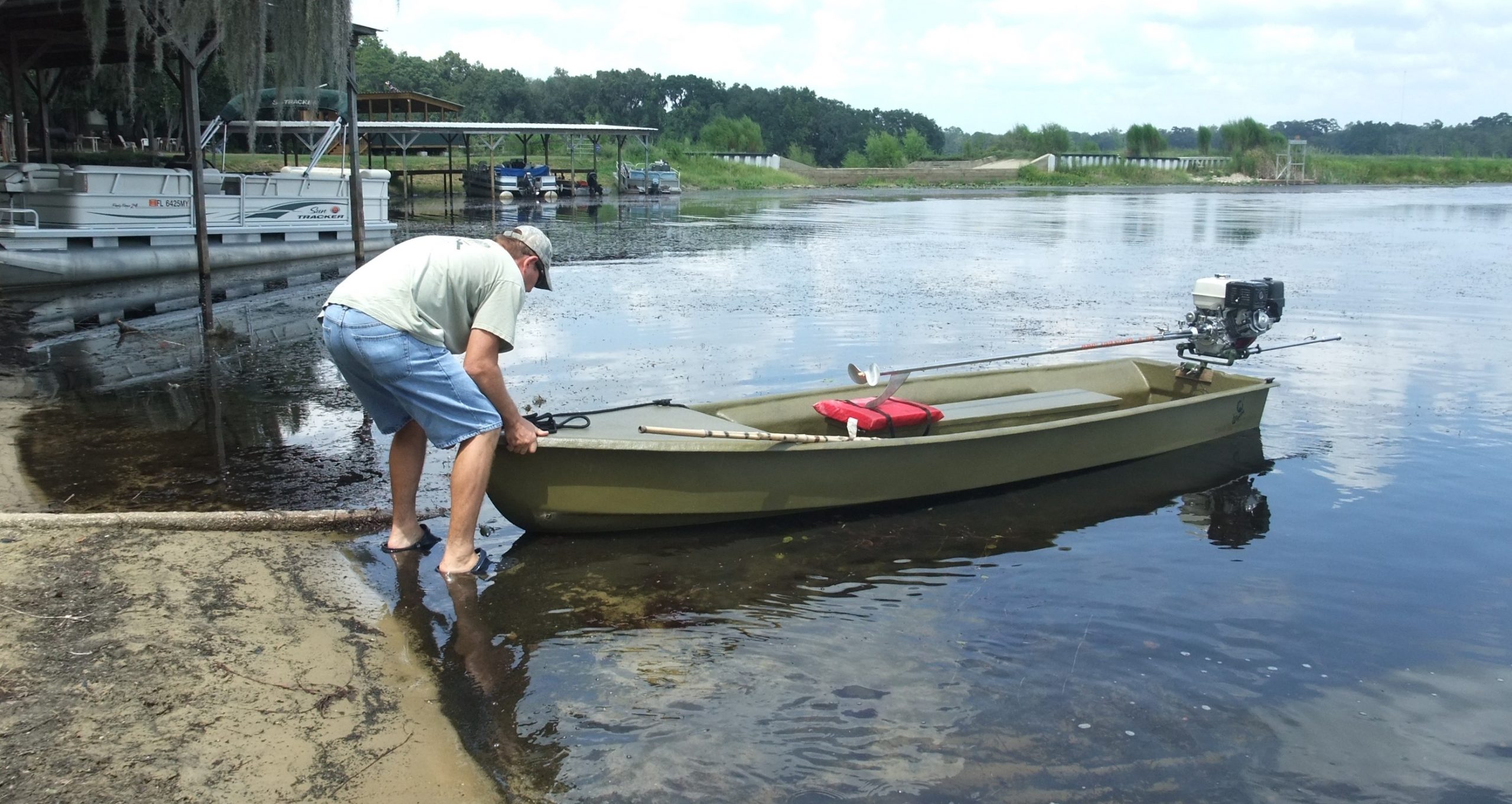 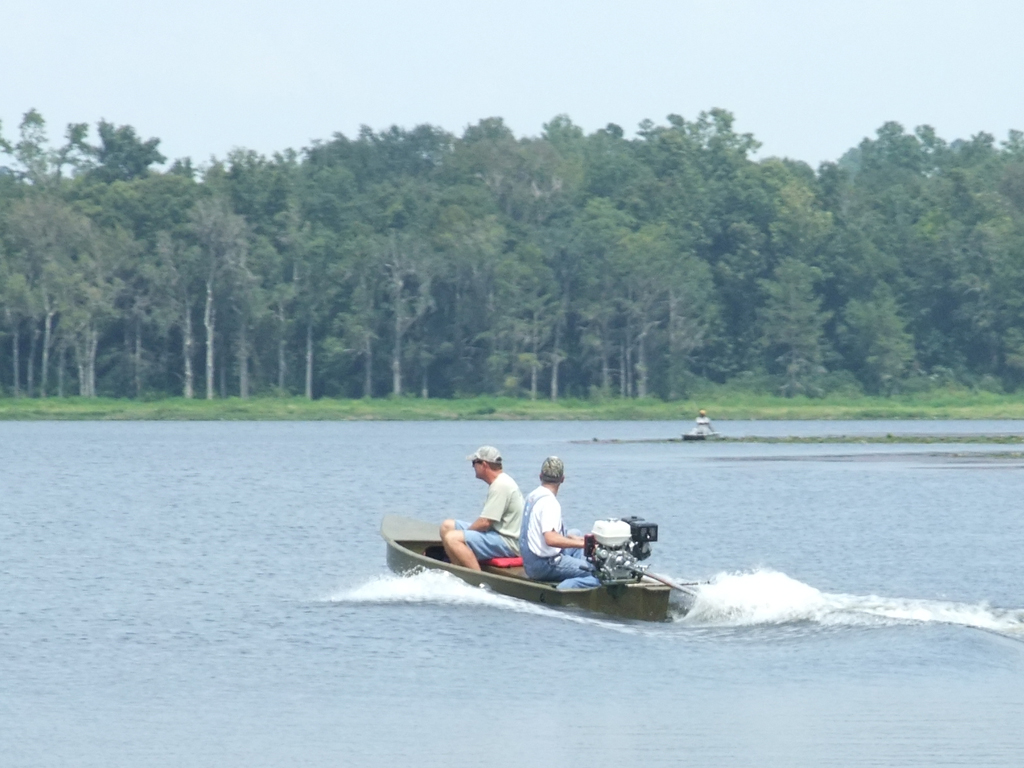 Once we were underway on beautiful Lake Miccossukee, the nimble little hull turned out to be a perfect match for our 13hp Swamp Runner longtail, which pushed the 200+ pound hull to a consistent GPS speed of 20mph with two adults and gear on board.  For two days we played all over that lake, seeking out the most challenging waters we could find.  The little boat easily negotiated the heaviest vegetation clogged waters, and slid agilely across every exposed mud patch the lake had to offer.  I also noticed how well the Dead Grass Green gelcoat blended with the flora and fauna found on Southern lakes.  The boat comes standard with level flotation, a trolling motor mounting recess, and meets all US Coast Guard specifications.

Our conclusion: There is simply no substitute for five generations and over 200 years of duck hunting and boat-building experience that has been handed down to Mr. Reese by his ancestors.   The Miccossukee Wigeon Duck Boat really is the ideal swamp skiff, and a perfect choice for hardcore waterfowlers who are seeking a boat that will get them through the nasty, and provide access to those remote places where other boats just won’t cut it.

So, if you’re looking for the ultimate duck boat, Cody Reese can build you a custom skiff that you are certain to be proud of.  It’s the kind of boat that will be a hand-me-down, and not a wear-me-out.  Want a Wigeon?  If you are located in South Florida, we are a dealer.  You can also visit Cody’s website at www.thewigeonduckboat.com , or give him a call at 850-688-3897.  You’ll definitely be glad you did. 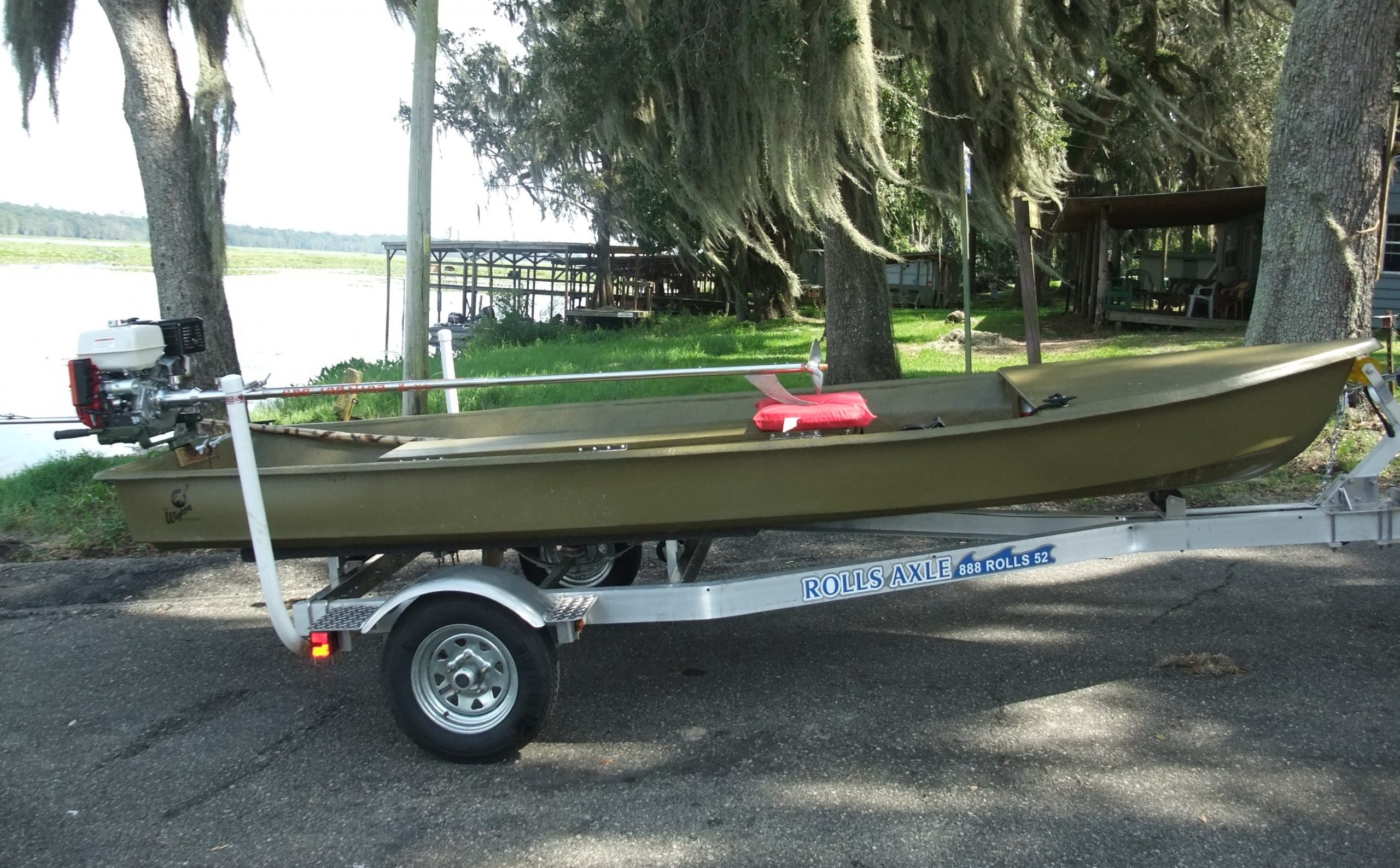